A full house of 60 anglers booked onto the popular Southfield venue.
Conditions today were cool with highs of just 6C and a stiff breeze.
On many of the pegs, the fish totally shut up shop and other sections were decided by very low weights. 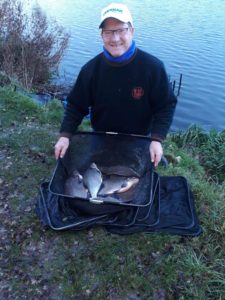 That being said, a superb weight of 30-04-00 of bream was recorded by overall match winner, Mark Turner (Halkon Hunt) who drew peg 17.
Mark makes his way to his second Golden Rod final by catching some quality bream on the worm hook bait to the open end feeder cast to 50m.

Second on the day was Martin Robinson who drew peg 16.
Fishing at 70m on the method with dead reds as hook bait, Martin found one quality bream and skimmers to weigh in 19-04-00.

Third placed Graham Lewis drew peg 19 and fished the cage with dead reds and worm to record a weight of 13-06-00.

Fourth overall was Mike Cayton from peg 20.
Mike scratched around with the cage feeder alternating with dead reds and worms to find a few skimmers to weigh 10-15-00.

Fifth overall was Nick Roberts from peg 33. Nick fished the cage at distance with dead reds and worms landing 10-09-00 of skimmers.

Sixth to the frame was Ian Dockerty from peg 30 with 10-02-00 of skimmers caught on the open ender with maggot and worm hook baits.

The dive in water temperature left many of the field bite less with ‘C’ Section only producing one catcher and other sections completely banking.

One zone of 20 anglers resulted in a draw for both a zone win and sections.

Our thanks to Mick Axon and the DDAA for hosting the Southfield qualifier.